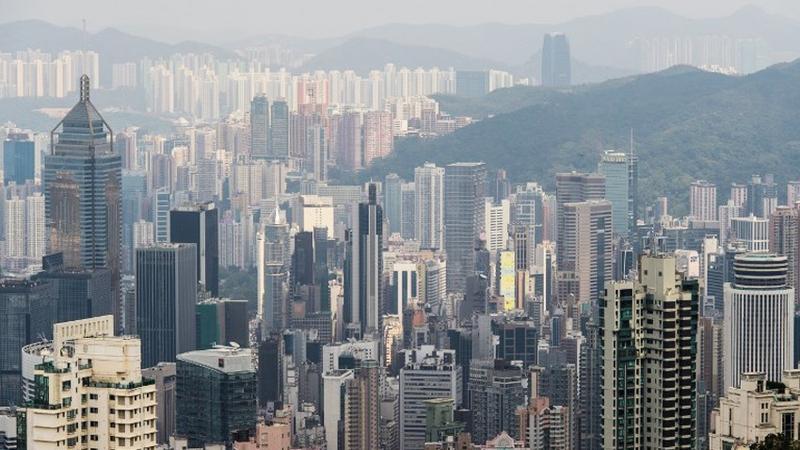 The general view shows residential and commercial buildings on Hong Kong island. Hong Kong is ranked the fourth globally on the ease of doing business in 2019 World Bank annual report, according to the HKSAR government. (ANTHONY WALLACE / AFP)

HONG KONG – The government of the Hong Kong Special Administrative Region unveiled fresh measures to support the financing of local small and medium-sized enterprises after the city’s private-sector business activity plunged by its biggest amount in over a decade.

The administration announced on Wednesday that the current SME Financing Guarantee Scheme will extend 90 percent credit facility, or up to HK$6 million (US$765,000), to the city’s SMEs, with a five-year repayment period. They will also be exempt from submitting audited financial reports in order to get the funding.

An economic storm is brewing in Hong Kong as the economic difficulties the city is confronting are driven by complex factors.

In addition, the SME Financing Guarantee Scheme and SME Loan Guarantee Scheme will allow loan borrowers to request deferring the repayment of the principal on their loans, and repay only the interest, for up to one year, effective from Wednesday.

“An economic storm is brewing in Hong Kong as the economic difficulties the city is confronting are driven by complex factors. We will monitor the situation in a dynamic manner and will introduce more measures when deemed appropriate,” Financial Secretary Paul Chan Mo-po pledged at Wednesday’s news conference.

The administration will also streamline the SME centers under the Trade and Industry Department, Hong Kong Trade Development Council, Cyberport Management Company and Hong Kong Productivity Council to provide one-stop services to SMEs. They can learn how to apply to about 40 funds provided by different government statutory bodies that provide millions of dollars of financial assistance.

“Liquidity is currently a major concern for businesses,” Hong Kong General Chamber of Commerce Chairman Aron Harilela said. “This will greatly help relieve the cash-flow problems that many SMEs are facing.”

Government assistance came the same day that the city’s private-sector business activity dipped at the steepest rate in over a decade.

The seasonally adjusted headline IHS Markit Hong Kong Purchasing Managers’ Index sank to 40.8 in August, down from 43.8 in July, signaling the steepest deterioration in the private sector’s business activity since February 2009. The PMI figure also hovered below the 50 marks for 17 consecutive months.

The rates of decline in output, new orders and export sales accelerated sharply in August. The only other times that the PMI survey recorded a steeper downturn in its more than two decades of history was during the SARS epidemic in 2003 and the global financial crisis in 2008-09.

The headline PMI is a composite single-figure indicator of economic performance derived from indicators for new orders, output, employment, suppliers’ delivery times and stocks of purchases. A reading greater than 50 indicates overall economic improvement, while less than 50 indicates a decline.

“The survey is now broadly indicative of the (Hong Kong) economy contracting at an annual rate of around 4 percent to 4.5 percent,” said Bernard Aw, principal economist at IHS Markit.

The Hong Kong government previously downgraded the city’s economic growth for this year to flat to 1 percent as lingering Sino-US trade frictions and protracted protests dampen domestic demand. The city’s exports and imports dropped for the ninth and eighth consecutive months respectively in July.

“With the trade war re-escalating in September and to further weigh down external demand and Asia’s electronic value chain, the city’s exports may take a further hit. High base effect and a relatively strong Hong Kong dollar could also worsen the decrease in exports after August,” said Carie Li Ruofan, an economist at OCBC Wing Hang.

Responding to US’ tariff threat targeting US$300 billion in Chinese goods, China announced additional levies on approximately US$75 billion worth of US goods on Aug 23, with some being implemented starting on Sept 1 and the rest to take effect from Dec 15.

In mid-August, Hong Kong’s finance minister announced an HK$19.1 billion financial package in the middle of this financial year to help businesses and households cope with challenges arising from a slowing economy.

“The weaker global economy has stunted Asian exports and the uncertain operating environment has weighed on investment. In particular, a softer capital formation has mirrored the weakening in exports, especially for trade-reliant economies like South Korea and Hong Kong,” Moody’s said in its research report.