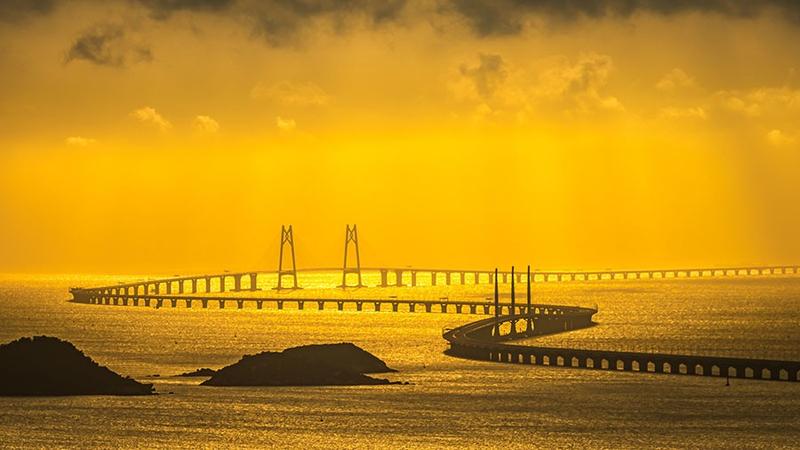 This undated photo shows the Hong Kong-Zhuhai-Macao Bridge, which plays an important role in the development of the Guangdong-Hong Kong-Macao Greater Bay Area. (WANG SHANGLIN / FOR CHINA DAILY)

GUANGZHOU – Development of the Guangdong-Hong Kong-Macao Greater Bay Area will be a major priority for the provincial government, according to Guangdong Governor Ma Xingrui.

Ma said the new cluster is crucial to enhancing Guangdong's social and economic progress in the near future.

"In the new era, construction of the Greater Bay Area is the guiding principle for Guangdong's further reform and opening-up," Ma said during a recent news conference outlining Guangdong's future development in light of the advances of the past seven decades.

Ma said Guangdong would team up with Hong Kong and Macao to construct a high-quality world-class city cluster.

"We will also jointly participate in the construction of the Belt and Road Initiative, which is of great importance to driving Guangdong's new vision of the overall opening-up in the future," Ma said.

We will also jointly participate in the construction of the Belt and Road Initiative, which is of great importance to driving Guangdong's new vision of the overall opening-up in the future.

The three Greater Bay Area members have strengths in different areas, Ma said. Guangdong has long been strong in manufacturing and foreign trade, while Hong Kong is internationally renowned for its finance, shipping and trade services and Macao is a tourism hub.

Guangdong's import and export value reached 7.16 trillion yuan (US$999 billion) last year, accounting for nearly a quarter of the country's total, according to the provincial government.

"Priorities will be given to integration of rules in education, trade, flow of talent, logistics, financing and information," Ma said.

According to a report on enterprise innovation in the Pearl River Delta region issued last month, the Greater Bay Area has been strong in technology research and development in recent years.

"The Greater Bay Area has a solid foundation to build itself into an international scientific and technological innovation center," said Zhu Guilong, director of the technology innovation center of South China University of Technology.

According to the report, research and development talent in 70 percent of companies in the Greater Bay Area accounts for more than 10 percent of employees.

Moreover, 10 percent of companies in the area said their investment in technology research equated to just over 40 percent of their sales revenue.

"Guangdong's future development will rely on technological innovation. The construction of the Greater Bay Area will also help bring more opportunities for local business in the allocation of global innovation resources," Zhu said.

The State Council Information Office said R&D expenditure in Guangdong exceeded 250 billion yuan last year, ranking first in China and accounting for 2.65 percent of the country's GDP. Guangdong ranked first in regional innovation capability in both 2017 and last year. The number of patent applications and grants reached 793,800 and 478,400 respectively.

In addition, contract turnover in the technology market was worth 138.7 billion yuan, the information office said.