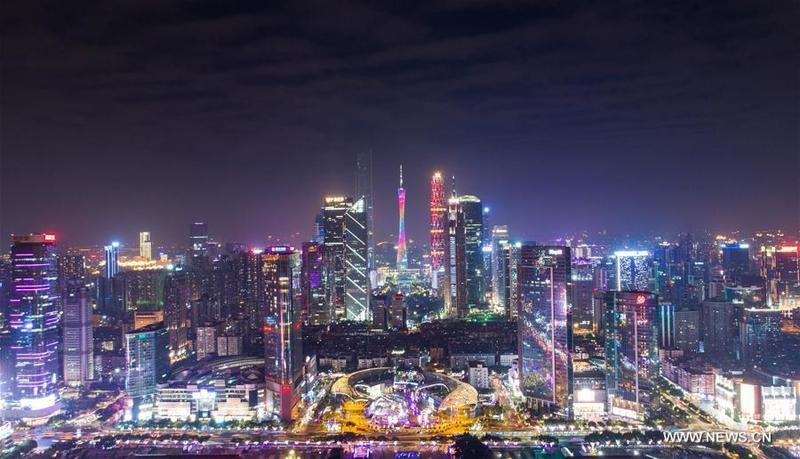 SHENZHEN – The last four years have witnessed tremendous changes in Guangdong's pilot free trade zones and innovation has been the key driver of high-quality development.

The province's FTZs, formally established in April 2015, include Nansha in Guangzhou, the provincial capital, Qianhai in Shenzhen and Hengqin in Zhuhai. More than 250,000 new companies have registered in the region since their establishment, according to the FTZ authority. Moreover, a total of 70 companies from the top 500 in the world have established more than 300 production facilities and subsidiaries in the zones.

The FTZs in Guangdong are carrying out new reforms and opening-up measures in order to build the Greater Bay Area into a role model for high-quality development, a target set by the central government

Nansha in Guangzhou focuses on public service reforms. For example, it has realized a "one-stop" service for businesses related to Belt and Road regions and sped up the issue of construction permission.

Many companies are attracted to bring their high-end manufacturing projects to the zone. GAC Toyota has established a production base with an annual capacity of 600,000 vehicles and the number is expected to increase to 1 million after the construction of another two assembly lines is completed.

Real estate conglomerate China Evergrande Group has invested a total of 160 million yuan (US$23 million) to build a new energy vehicle factory with an annual capacity of one million units.

In addition, the world's leading automotive parts supplier Denso of Japan is also setting up a research center for new energy vehicle electrical controls and vehicle-mounted systems in Nansha.

This undated photo shows the entrance of the Qianhai & Shekou Area of Shenzhen, which is part of the China (Guangdong) Pilot Free Trade Zone. (PHOTO PROVIDED TO CHINA DAILY)

Wang Jinxia, deputy director of the Qianhai and Shekou FTZ administrative committee, summarized Qianhai's changes in the past four years in one sentence: It has developed from "one new building in three days" to "a new innovative regulation in three days".

Attracted by new reform and opening-up breakthroughs and preferential policies, about 245 licensed financial institutions have registered in the zone so far, he said.

The nation's first cross-border transaction platform for RMB credit assets, the first brokerage majority-owned by an overseas bank, and the first reinsurance company Qianhai Reinsurance were all set up in Qianhai.

He added: "Qianhai also has become one of the nation's largest gathering places of novel finance, as more than 50,000 pioneering financial service providers, offering services such as commercial factoring and financial leasing, have set up in the zone."

In addition, the total amount of actual withdrawals of RMB loans has reached 37.1 billion yuan so far.

Besides the financial sector, Qianhai also sets an example for incubating innovative projects. The Qianhai Shenzhen-Hong Kong Youth Innovation and Entrepreneur Hub, or E Hub, is home to more than 350 entrepreneurial teams.

Joe Zhao, who graduated from the University of California, Berkeley, started a business applying artificial intelligence technology to welding robots in Qianhai in 2017. He said many students of the school have launched startups there.

He said he was drawn by the zone's preferential policies of tax reduction and subsidies in the beginning. In the past two years, he has found the entrepreneurship ecosystem to be another advantage.

He met one of his most important clients in a meeting in Qianhai and many high-end talents are willing to work in the area. He is determined to establish his company's R&D team in Qianhai and explore manufacturing bases in other places in Guangdong.

The FTZs are carrying out new reforms and opening-up measures in order to build the Guangdong-Hong Kong-Macao Greater Bay Area into a role model for high-quality development, a target set by the central government.

Guangdong province earlier this month released an implementation suggestion for the GBA's construction, saying its FTZs will be empowered with more administrative rights for further reform and opening-up.